2012: The first five brands of our own stamp edition, first edition on April 1, 2012, FDC and special stamp "... from Leipzig into the whole world"

Own first stamp issue of the online mail order M-ware® Electronics in Leipzig appears on 1 April 2012 on a First Day Cover exclusive in DIN C5 format. As the eighth anniversary of the company falls on a Sunday, a special occasion-special will be launched. With this specially designed for the special edition to be knocked off 1.4.2012 in Philately center of Deutsche Post in Weiden the First Day Cover. Keep reading the story in sequence:

Once in Finland and Austria a few years earlier Customized stamps were produced in 2009 is created this way in Germany. These sets out the German Post, the program "brand individually" on. The company's development in recent years is considerable, which is reflected in an above-average increase in shipping volumes. On this basis arises towards the end of 2011 the project "Custom Stamps for the online mail-order M-ware® Electronics". From the outset, it is clear that the stamps to be developed, taking into account the existing CI of the company that will support corporate image both consistent and effective advertising. To have therefore come the little works of art sympathetic, for the use of cartoons is designed. Under the slogan "... of Leipzig in all the world" is an atmospheric and sympathetic stamp series for the company M-ware to be developed. The participation of well-known graphic artist and cartoonist Leipzig Lothar Otto proves hit the bull's eye. After several different designs exist, the more scouting towards people of different nationalities, which carry the packets of M-ware in the world: an Indian wearing a turban, a cowboy with a Colt on a belt, a European with Flat Cap, an Indian with feather headdress . Allen designs together is the package that they determine the recipient happy. The aforementioned slogan "... of Leipzig in all the world" is the connectedness of the Leipzig-based company with its city. This is blue and yellow exacerbated by the use of the Leipzig colors by a tied yellow package with blue enterprise logo is used.

Lothar Otto is a gifted cartoonist who published since 1961 cartoons in the Berlin satirical magazine "Eulenspiegel". In addition, Lothar Otto is also long been known by many book illustrations and cartoons for other print media, so the Leipzig People's Daily and the Swiss Nebelspalter. With his subtle humor and friendly Lothar Otto is the perfect caricaturist for this project. He celebrated his 80th birthday in March 2012, which, however, his creative urge offensichtlich- not brake -very in the slightest.

The slogan of our shipping "... from Leipzig into the whole world" was also used as the title of the brand series. The series depicts how the packets from Leipzig are held all over the world. In addition, a Christmas motive was created.

The slogan used can also be found on the special stamp again, to which the city of Leipzig is symbolized by the illustrated Battle Monument. The building diagonally to illustrated shows the establishment of the shipping trade. -and- Located centrally on the stamp which may be found to be unusually applicable turning himself the company logo in the form of an inclined "M". Such a representation is on a special normally not permitted. Even the stamp is certainly interesting not only by the presentation of Voelkerschlachtdenkmal for philatelists, but also for the friends and visitors to the Voelkerschlachtdenkmal, which in 2013 celebrates its 100th anniversary.

Here are the first five comic stamps now, which took place on 1 April 2012, the start of the series: 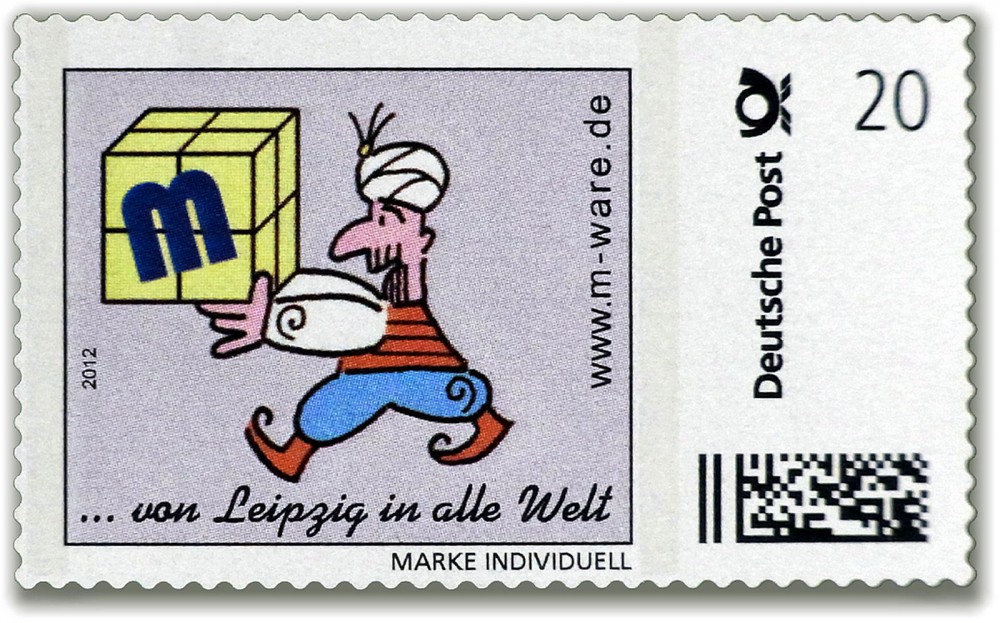 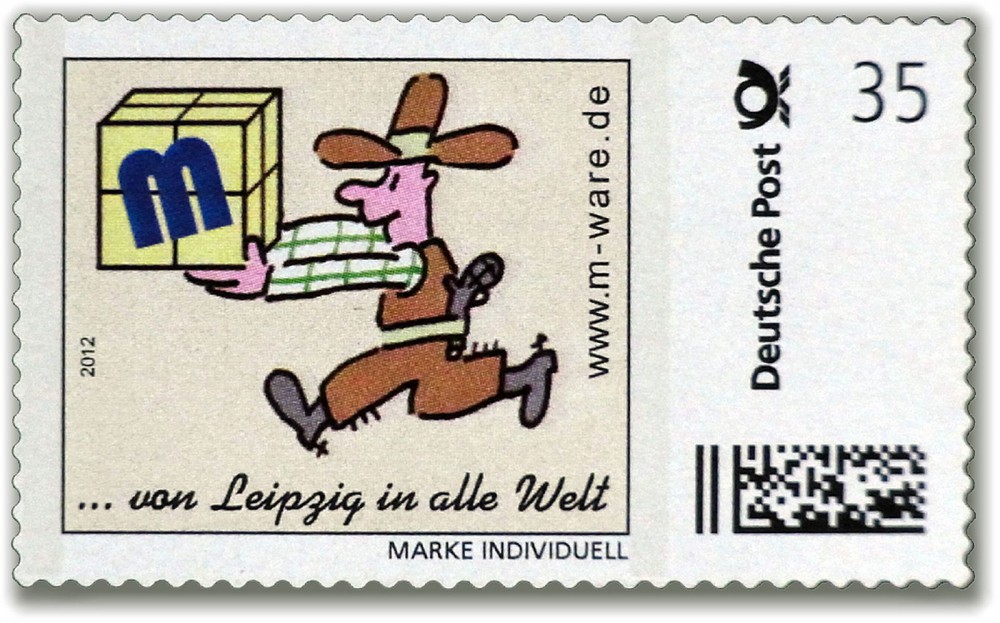 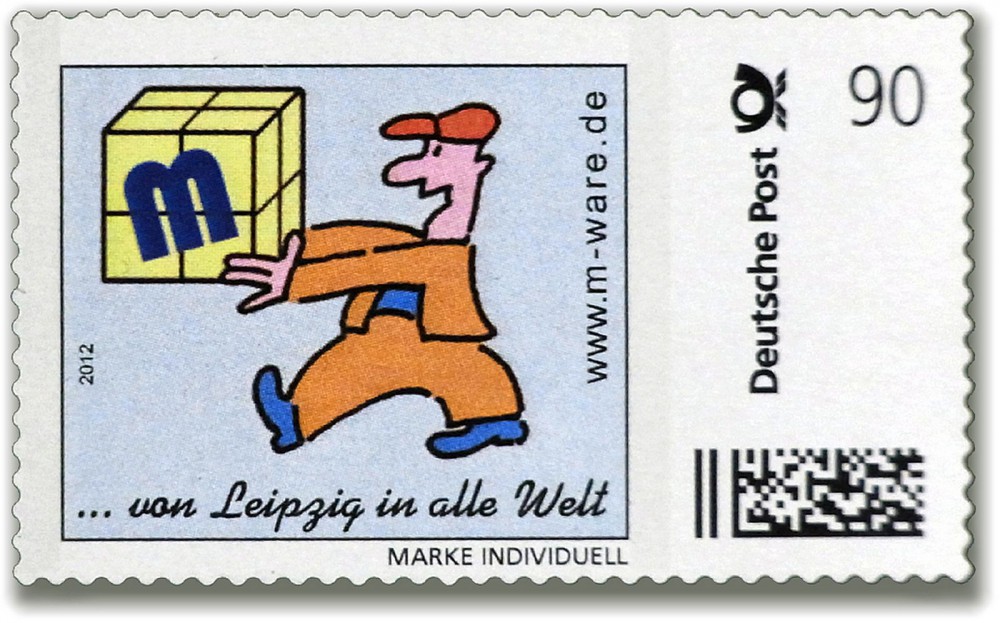 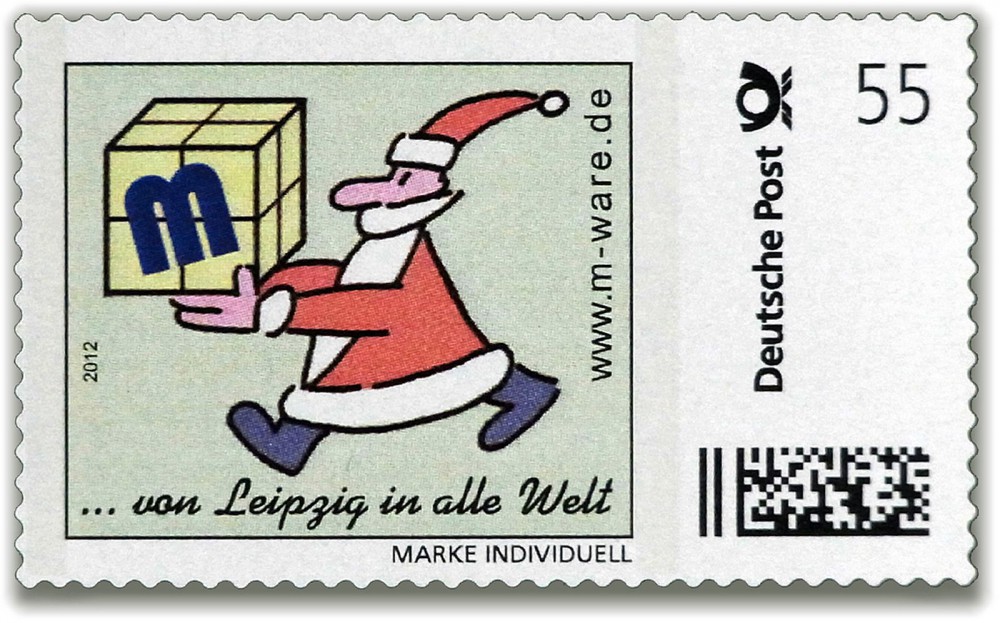 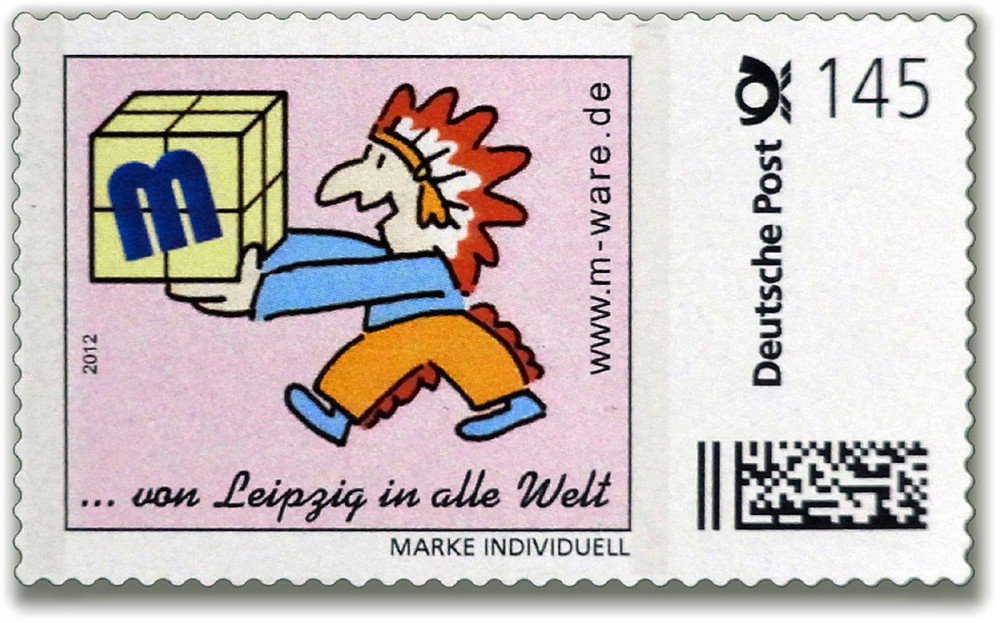 The perfectly crafted from high quality materials handling for the First Day Cover has another first: the first time appears on a First Day Cover a QR code; thus it is an interactive medium. Using smartphone can log in directly to the shop listing of M-ware® Electronics viewers via the QR code. Suitable also a stamp is -next the Cartoonmotiven- produced with an interactive QR code: 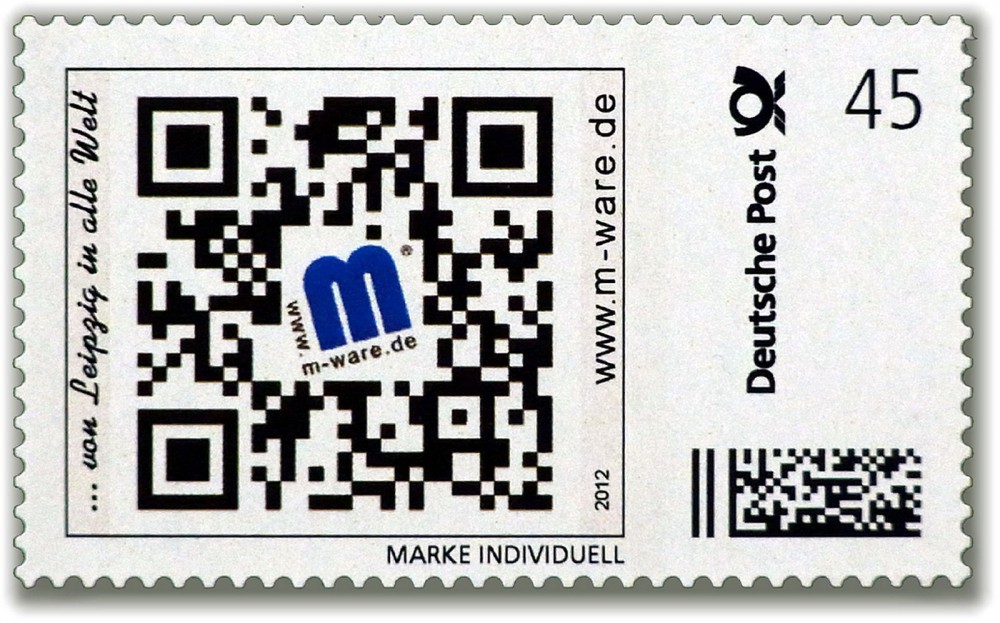 The Deutsche Briefmarken-Zeitung (DBZ) reported in its March issue 2015 (No. 6) on the issue of our QR-code stamp:

The output of the Ersttagsbriefes with the five output Cartoon brands of 2012 takes place strictly limited; only 265 copies, of which 170 mint stamped, contain the complete cartoon brand set. The First Day Covers are consecutively numbered on the back.

This edition is mainly used for the franking of mail within the own company. The design of the special will be a little later the basis for another purpose: it serves as a template for a two-color company stamp.

This stamp issue in connection with the remarkable Lothar Otto cartoons and the special set is undoubtedly a highlight in the recent development of the company. It is probably quite soon adorn the collections of some philatelists. That the stamps are printed in the program "brand individually" exclusively as self-adhesive stamps, should thereby be readily accepted.

A stamp from the presented sentence, the 145ct. stamp with the Indian motive is already referenced in Wikipedia, as an example of a "brand individually" by Deutsche Post. Our interactive stamp with QR code motive the first of its kind in Germany impossible, to was taken from Wikipedia. This is not only a cause for joy, but also an incentive for future projects. 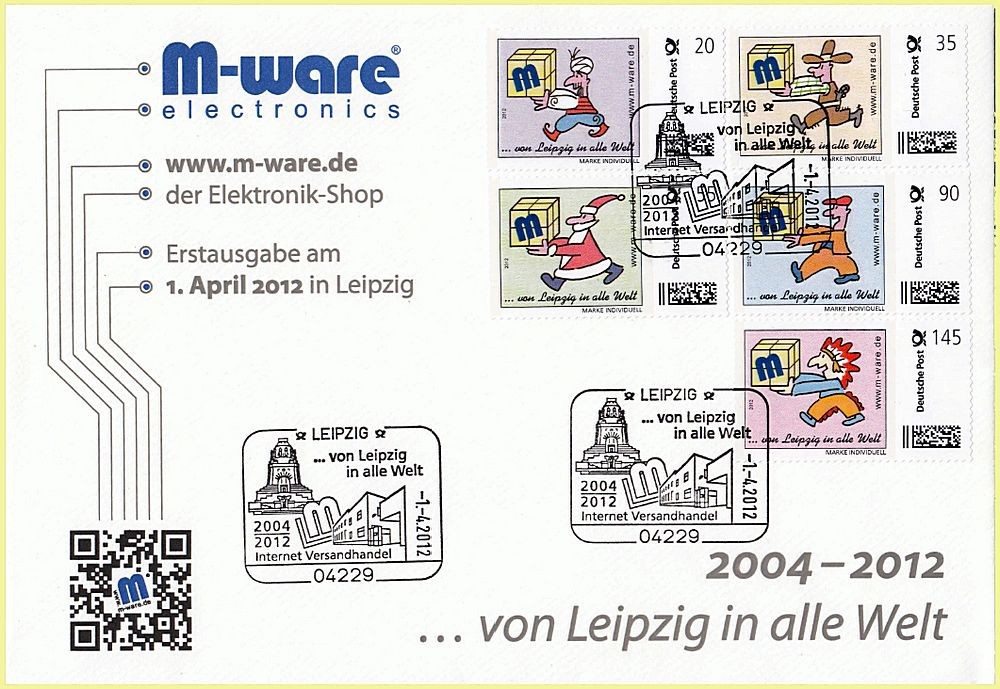 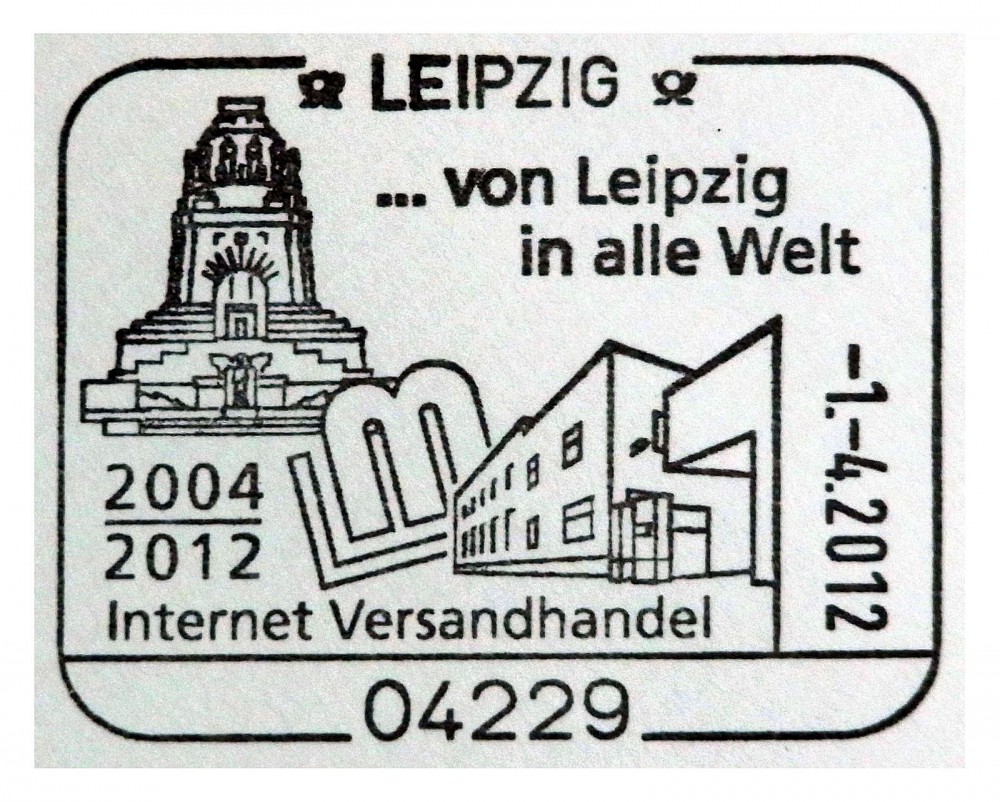 Last but not least is the 2012 Stamp Edition completed with a mark showing the company logo: 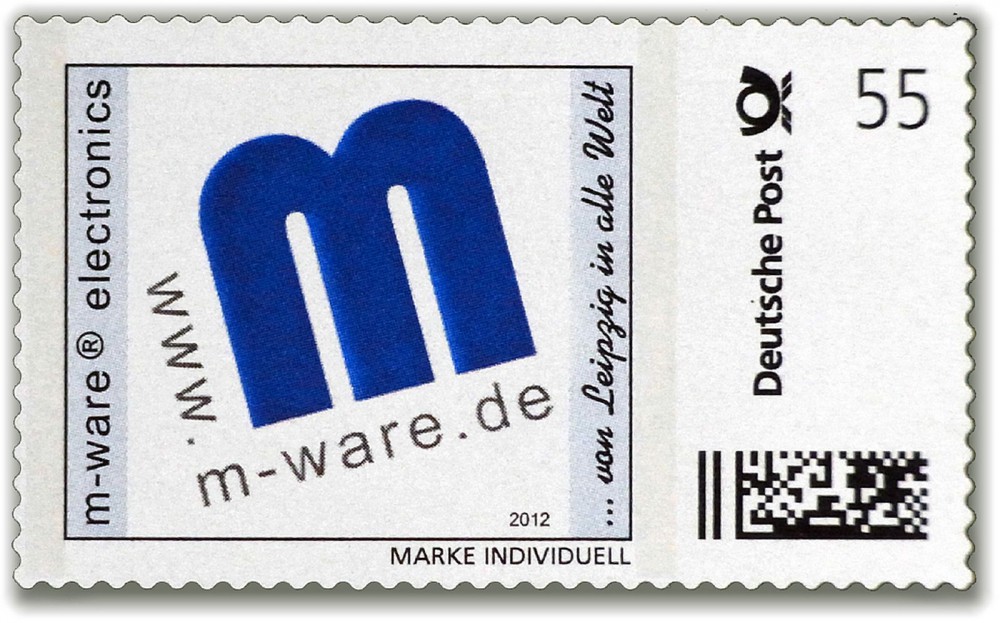 And that's just the beginning.

Continue here - discover all vintages of our stamp issue:

For shipment we use the services of DHL and Deutsche Post.

We carry either as a DHL parcel or as Deutsche Post mail letter.

No COD, no shipment to PO Boxes.